It’s not everyday you encounter a species close to extinction.

But, when I first saw the shot below, I didn’t know what I was looking at exactly.

What do you think?

In case you’re unsure of what you’re seeing like I was, that’s a monkey being carried away on its ass by a bird.

More specifically, it shows the critically endangered Philippine Eagle returning from a hunt with a Long Tailed Macaque securely (and awkwardly) in its talons. The photo was taken by conservation biologist Kahlil Panopio from the Haribon Foundation during a research expedition in Nueva Ecija last May 2014.

When I asked Kahlil how he felt after that moment he said:

“I was shaking with excitement when I saw what I had taken a picture of. No one has ever seen it here in over 36 years.”

END_OF_DOCUMENT_TOKEN_TO_BE_REPLACED 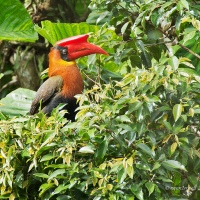